Media Type
Image
Place
Item Types
Photographs
Scrapbooks
Description
Nobleton Community Hall. located in York Centre WI district
Top: Under Construction Back in the Thirties. Bottom: 1986
Nobleton Community Hall is truly a “community” place. It was built in 1936 by volunteer labour with materials purchased through fundraising.The accomplishment of building a hall in Nobleton was a demonstration of the determination of the people and the WI in Nobleton during the difficult times of the depression.

When writing the Tweedsmuir histories for community buildings and organizations in 1962, the ladies were told by older community residents that the former building on the present hall site was known as the Music Hall. It used by the Nobleton Band for band practice, concerts and dances then it was used for a variety of activities such as Sunday School parties, concerts, box socials, medicine troops, council meetings and a once a year social and dance(by invitation only). As time went by, the old building became inadequate to meet the demands of the activities so a community meeting, under urging by the WI, was called for March 25, 1935. Three trustees were appointed. A new building was planned and the community hall was completed by 1936. This hall costs $3,578 with all the labour being donated. All but $1,500 was raised with a mortgage covering the balance. Fund-raising committees were set up and money was raised by holding dances along with a special drive and the hall became mortgage free. The committee went on to plan for the building of an arena to replace the old one. In 1947, WI donated $1,000 to this project. In 1962, a new kitchen was installed as well as to new washrooms upstairs and improvements were made to floor surface in the hall. The WI contributed $3,000 to this project. Later the front entrance was changed to include a foyer at the side of the building. The hall is administered by King Township with WI members and Lion’s Club members sitting on the board and the hall continues to be used to this day. Just a note, in 1954, the community hall was a sanctuary for people displaced by the flooding and ravages of Hurricane Hazel.

!n 2008, Nobleton WI celebrated its 100th anniversary and getting the hall designated was one of the highlights of the year long celebration, along with presenting the WI Play, For Home and Country and receiving a Federal Heritage Canada Grant through the “Building Communities through Arts and Heritage” Program, designed to support activities which celebrate local heritage and the arts.The King Township Heritage plaque was unveiled and the hall was rededicated for the community’s use.

Further information is available on line in Tweedsmuir History Books

www.kinglibrary.ca. Click on Local History from menu bar at top of page, then open Tweedsmuir History and select Nobleton from the branches listed 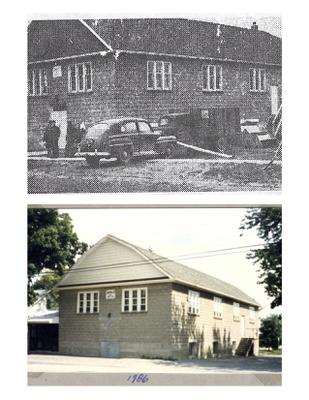